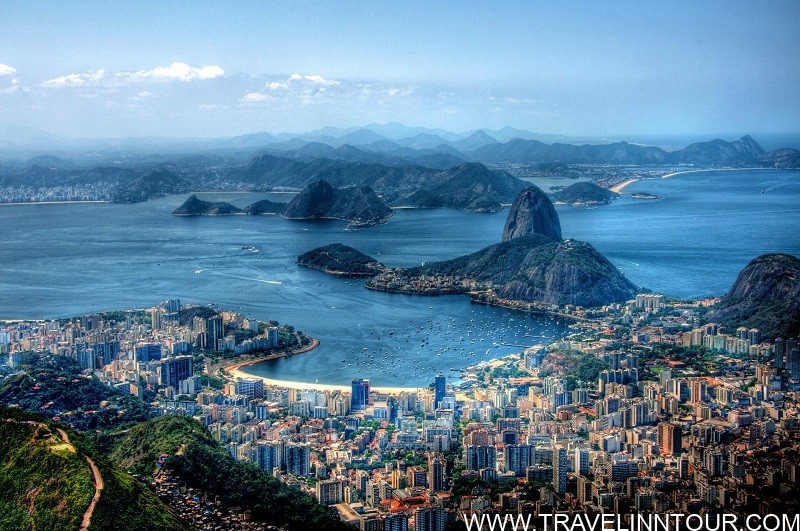 Visiting Rio de Janeiro should be part of your travel plan this year, as it is a destination of wonders, and it hosts some of the most sought-after tourist attractions in the world, as well as being an exceptional cultural meeting point. It is also a wonderland for the world’s most talented soccer players. Once you land at Rio de Janeiro Gallio International Airport, a flight there is the start of an unforgettable, lifelong experience.

However, the perfect timing to reach Brazil’s second-largest coastal city matters. It could be in February when the much-anticipated country carnival has just begun or in December to experience exhilarating sunshine and warm weather.

The Rio Carnival is a world-famous fair of dancing, music, and shimmering costumes, where you can join more than two million people taking to the streets to celebrate this amazing event, and watch the ‘winners’ as samba schools hold their various shows that attract crowds in Sambodromo, which is the name given to Samba schools display places during the Brazil Carnivals. 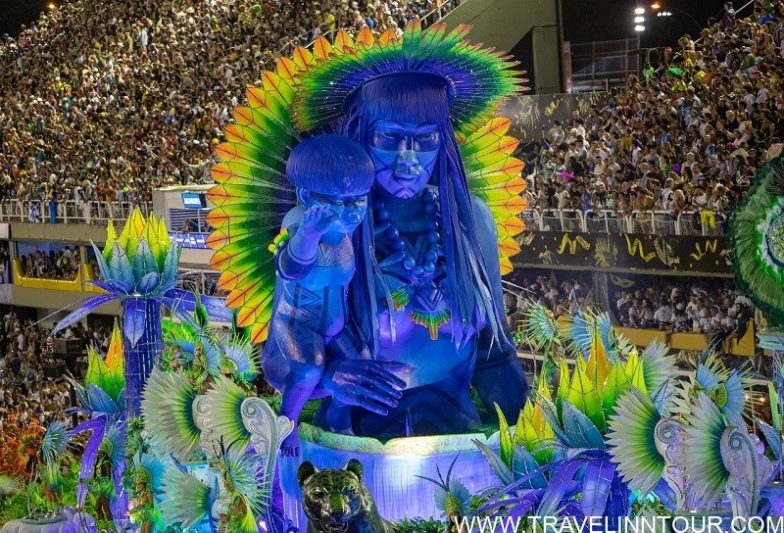 The Rio Carnival dates back to 1723 and is considered the largest in the world. More than 2 million people are on the streets in preparation for this outdoor event, which combines parties, parades, and cultural performances every year.

You really can’t think of Rio without its gorgeous beaches, first and foremost among which are Copacabana Beach and Ipanema. While Copacabana Beach is distinguished by its golden sand lined with volleyball nets, football fields, and training equipment, Ipanema Beach boasts not only enchanting turquoise waters, but also its attractive location in one of the most expensive places in the city, and has also been named “Best Urban Beach in the World” Its vibrant waters attract water sports fans.

Indeed, Ipanema has a long stretch of fine white sand and cleaner waters than that of Copacabana, bordered by high-end restaurants and nightlife, and is regularly considered one of the best beaches in the world.

Brazilian cuisine is a mixture of ingredients taken by settlers to the country, starting with the veguada, which is undoubtedly the national dish, invented by workers who were transported from Africa to work on farms. Use this thick soup of black beans with orange slices, shredded vegetables, and rice, along with meat.

The Most Famous Places in Rio de Janeiro To Visit.

Corcovado is the name of the mountain on which the statue of Christ is placed. And this statue is considered a memorial and one of the signs of the city of Rio de Janeiro. And spread safety and peace in the hearts of the residents of the whole city. And it is considered a symbol of Christianity in the whole world, not just Rio de Janeiro or Brazil.

This statue, which is a symbol of Brazil as a whole, is located on top of Corcovado Mountain and is listed as one of the New Seven Wonders of the World, as this peace symbol was built in 1931, and took nine years to complete, and it is made of reinforced concrete and is 38 meters high.

One of the best things you should do when you start your trip to Rio de Janeiro is to enjoy the beaches. And Copacabana Beach is one of the most beautiful beaches in Rio de Janeiro. Copacabana Beach is characterized by white sand and clear waters that resemble in shape to the color of turquoise blue. And this is what makes many people go to this beach specifically to enjoy their summer every year and to have relaxation and recreation there.

And you can enjoy on Copacabana Beach playing volleyball and many games that make your vacation something special.

This mountain is located in the middle of Rio de Janeiro and overlooks the Atlantic Ocean. Sugar Loaf Mountain is famous for its cable car, which makes it the most famous place in the city, as the cable car takes tourists on a tour around the whole city, watching them from above and enjoying the attractive landscapes.

More than a million tourists take a cable car to Sugar Loaf Mountain each year for unparalleled views of Rio, so if you plan to join them, expect to see from there a unique blend of stunning landscapes of the bustling city, with enchanting views of Guanabara Bay, which consists of More than 130 islands, along with enjoying the sparkling waters of the Atlantic Ocean.

Rio has perhaps known the world over for its most fun attractions, but it is also one of the most exciting and innovative centers of culture in Brazil. The National Museum of Fine Arts here houses the most comprehensive collection of Brazilian art in the country, with nearly 20,000 pieces of fine, decorative, and popular art from the 17th to the 20th centuries. The Museum of Contemporary Art in Niteroi is a piece of art in itself, which Designed by legendary architect Oscar Niemeyer, it looks like a spaceship.

What is striking is the new Museum of Tomorrow, designed by the Spanish architect Neuturi Calatrava, and it was built next to the waterfront in Pir Maua, and it may look like a dinosaur skeleton, but inside you will find many displays that focus on sustainability.

On a continuous path from the four-kilometer-long Copacabana Circle, the beaches of Ipanema and Leblon are separated by the Jardim de Alah canal that drains the lake Lagoa Rodrigo de Freitas. Along the waterfront promenade are large hotels, roadside cafes, and restaurants.

These two regions, although famous for their beaches (one of which is famous for the song The Girl from Ipanema) have a vibrant cultural life, with art galleries, cinemas, and the avant-garde theater. The Praça de Quental in Leblon is the scene of an antique market every Sunday, and on Sundays Praca General Osorio hosts the Feira de Artesanato de Ipanema which houses crafts, music, art, and local foods.

The Paseo Publico Park has the famous Fountain of Love, and in the past, it contained a basin decorated with plants and bronze statues. You can go on a special tour inside the park and enjoy its features, especially the boy’s fountain with the Viceroy logo.

Home to more than 7 million people, Rio is a large, sprawling metropolis. However, it is a unique place, between mountains and next to the sea, which means that there is a lot of untouched green spaces to explore, and Tijuca Forest National Park, located in the back of the city, is home to the largest urban rainforests in the world with Walk for long distances, amid the splendor of waterfalls, and various bird watching opportunities.

Every year before Lent, a solemn festive carnival is held in Rio de Janeiro, and it is one of the most important tourist destinations in Rio de Janeiro. It is considered the largest carnival in the world, with about two million people gathering on the streets to celebrate and take pictures.

The first carnival dates back to 1723, and it is a procession filled with decorations and ornaments, and revelers from various samba schools. Each school performs an artistic show with different dances and costumes, and tells a distinctive short story, with music added to it.

The carnival is organized as a masquerade celebration within the city, with a mixture of polka, waltz, and, of course, samba. Due to the increasing number of participating schools, the offer was divided into two categories, so be sure to visit the city at this time and enjoy the wonderful shows.

One of the newest sights in Rio was started in 1990 by Chilean-born artist Jorge Celaron as his gift to the Brazilian people. Until his death in 2013, a long trek of the steps in front of his home was covered with mosaics made of tiles, pottery, and mirrors, many of them in blue, green, and yellow – the colors of the Brazilian flag. Selarón began using broken tiles collected from construction sites and demolished ancient buildings, but as he caught the attention of tourists, people began to bring him pottery and tiles from all over the world.

Plots from more than 60 countries are now represented in 250 steps, which cover 125 meters of stairs. These steps are a popular location for the movie and were featured in the 2016 Rio Olympic video

On the hill directly above the harbor is the Church and Monastery of São Bento, one of the finest Benedictine complexes in Brazil. The original church in 1617 was devoid of aisles until it was expanded in the second half of the seventeenth century by adding eight side chapels. The finest Benedictine artists participated in decorating the interior. The ample sculpture covering the walls and ceiling was mainly the work of a monk named Domingos da Conceição, who was also responsible for the figures of Saint Benedict and Saint Scholastica on the high altar.

The choir contains silver works by Mystery Valentim and 14 paintings by Ricardo de Pilar, a monk who was the foremost Benedictine painter from colonial Brazil. His masterpiece, Senhor dos Marterius (Christ of Passion), is in a sacristy monastery.

The city of Rio de Janeiro is truly a wonderful city and a distinctive tourist destination. We recommend that you visit it soon.