Sometime between 7-6 million years ago, our primate ancestors stood up and began to walk on two legs.

A defining moment along the winding evolutionary roads to becoming human, this is the feature researchers use to distinguish hominins from other apes. Although why it occurred remains an intriguing mystery.

By about 2 million years ago, we became fully bipedal, but there were many steps along the path to get us there. Some of these steps still elude our fossil records, but a new study analyzing the remains of a female Australopithecus that researchers nicknamed Issa, has found another.

“Issa walked somewhat like a human, but could climb like an ape,” says paleoanthropologist Lee Berger from the University of the Witwatersrand, South Africa.

Silhouette showing the newly-found vertebrae along with other skeletal remains from the species. (NYU & Wits University)

To achieve our tall stance, the primate skeletal system had to be largely reorientated – from feet to knee joints to spine.

The lower part of the human spine is curved inwards, unlike in monkeys and other apes. This distinct curve, called lordosis, helps us bear the weight of the towering top part of our body.

In 2008, 2-million-year-old adult female Australopithecus sediba fossils were found in Malapa, South Africa. The missing pieces made it unclear if she bore an ancestral straight, or modern curvature to her spine.

“Associated series of lumbar vertebrae are extraordinarily rare in the hominin fossil record, with really only three comparable lower spines being known from the whole of the early African record,” explains evolutionary morphologist Scott Williams from New York University.

The bone structure of Issa’s fingers suggests she was well suited to arboreal life in the trees (orangutans share her trait), as does the highly flexible foot joint which is useful for vertical climbing.

Dental analysis suggests Issa’s diet was likely high in fruit and leaves, like that of the savannah chimpanzees, again suggesting an arboreal life. However, the angle at which her femur connects to her knee joint implies she was capable of standing upright.

In 2015, a further two lower spine vertebrae fossils were found that fit perfectly with the rest of Issa’s remains. Reconstructions using micro-CT scans of the fossils have just confirmed her species did indeed have a curved lower spine – definitive evidence she was, at least in part, bipedal.

“These vertebrae practically complete the lower back and make Issa’s lumbar region a contender for the best-preserved hominin lower back ever discovered,” explains Berger. 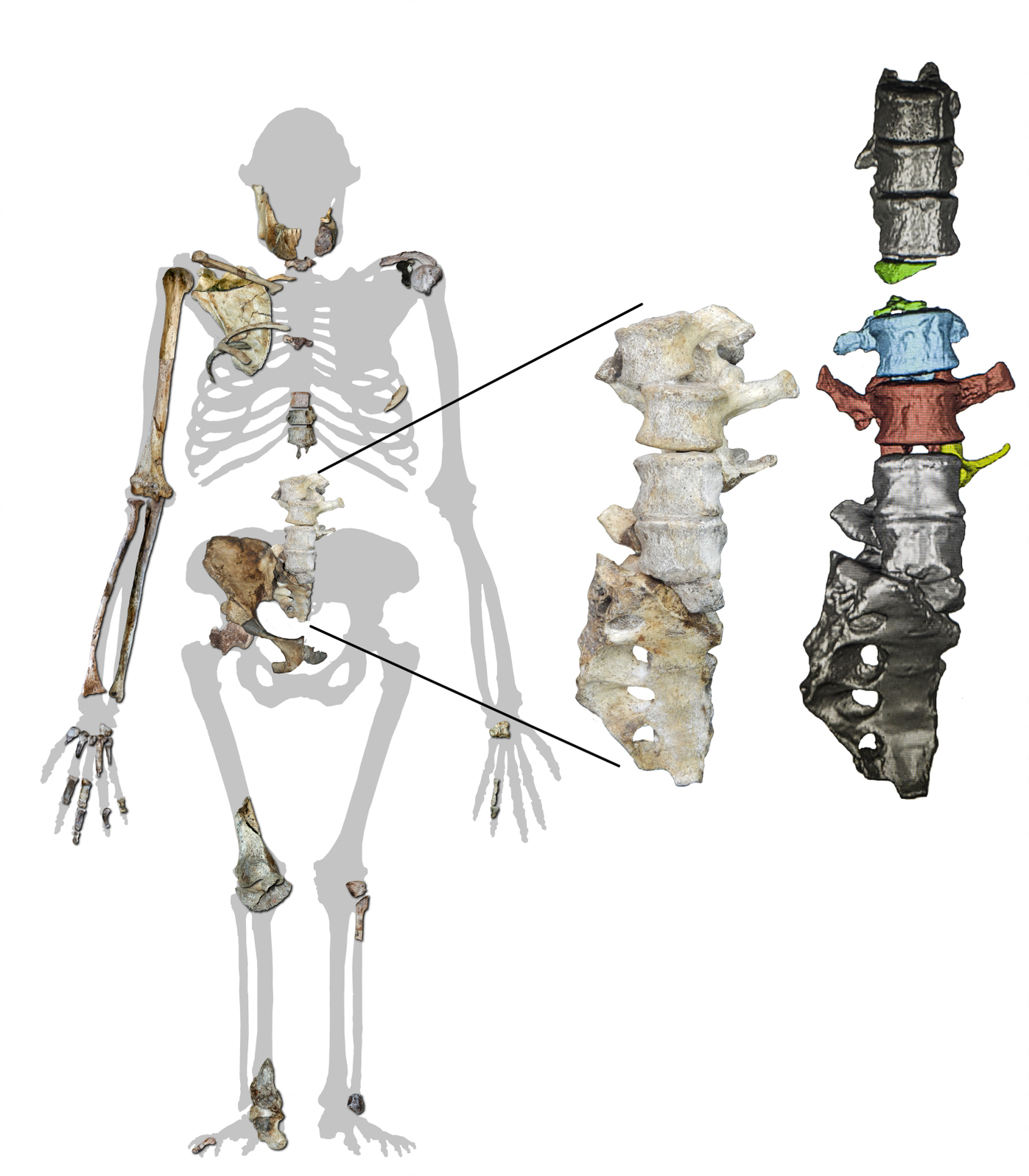 Newly-found vertebrae (colored) along with other skeletal remains of the species. (NYU & Wits University)

This, along with further support from the other fossil vertebrae found along the newest pieces of Issa, suggests she and her kind had an intermediate shape between more modern humans and great apes. They have lordosis, but their vertebrae also retained long costal processes – muscle attachment space for aiding powerful climbing.

The spine shows us that Issa “could and did climb using her upper limbs as well as many apes, but it also shows she could walk on two legs extremely well,” the researchers said in a statement.

A previous analysis on Issa’s hands also concluded she demonstrated intermediary features between apes and humans.

What this means about A. sediba’s debated position in our family tree is yet to be examined – were they a dead end, or a direct ancestor? Regardless, the researchers speculate that their findings may even help us better understand our own physiology.

“Our lower back is prone to injury and pain associated with posture, pregnancy and exercise (or lack thereof),” the team writes in their paper.

“Therefore, understanding how the lower back evolved may help us to learn how to prevent injuries and maintain a healthy back.”

Their research was published in eLife.