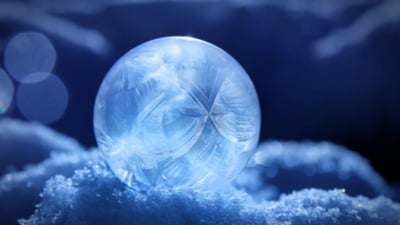 The Dragonspine mountain borders both Mondstadt and Liyue. However, it is considered a feature of the former. The Statue of Seven on the mountain is of Barbatos, the Archon of Mond. Under all the ice and snow on the mountain, the remnants of a lost civilization lie buried, waiting to tell their story.

This is the story of Sal Vindagnyr.

Similar to all other elemental-themed artifact sets, the Blizzard Strayer set is the best for a DPS Cryo user. At least, one that can deal constant Cryo damage. Among the current characters, Ganyu, Ayaka, or Chongyun are likely candidates. Eula and Rosaria are primarily physical damage dealers, but they still benefit from the Crit Rate boosts. Diona’s and Qiqi’s skills benefit from the Cryo DMG boost, as they don’t have any way to infuse Cryo for their weapon attacks. Both of them are support characters as well, so they benefit more from other stats.

Its 2-set effect increases Cryo DMG by 15%. Adding two more artifacts increases the equipped character’s Crit Rate by 20% when the target is affected by Cryo. It adds 20% more Crit Rate if the target is Frozen. With the DPS meta relying on critical hits, this is a good thing for those characters.

Because of the four-set effects, building Crit Rate doesn’t have to be the priority. A frozen opponent automatically increases it by 40%. Add the Cryo Resonance effect to the party, and it’s a total of 55% bonus Crit Rate.

Some players even use it on non-Cryo users. Take Xingqiu for example. Being a Hydro user, he can easily freeze enemies with Chongyun’s infusion circle (E skill). Slap on a 4-set Blizzard Strayer on Xingqiu, and keep him in the Cryo infusion circle. He instantly freezes opponents whenever he uses his skills and keeps the 4-set bonuses active. For another option, there’s even a video on Youtube about a ‘Cryo’ Beidou!

The artifacts come from the domain at the peak of Dragonspine, the Peak of Vindagnyr. The other set that could be farmed in the same domain is the Heart of Depth, the Hydro-themed one.

The People of Sal Vindagyr

Before ice and snow set upon the mountain that is called Dragonspine, it was once a verdant, flourishing mountain. It was called Vindagnyr, and the kingdom that ruled it was called Sal Vindagnyr. The people who lived there took refuge on the mountain, away from the blizzards that plagued Mond before Barbatos’ time. They built their city on the mountain and flourished for a time.

The people took care of a white tree located in their kingdom. They place so much importance on that tree, such that when a princess was born beneath it, the infant received blessings from the priestess. One of those blessings is the power to see the future, one that expressed itself in her art. Over time, she started painting frescoes, some of which can still be seen in the game’s present.

During these events, the Skyfrost Nail anchored Celestia to the mountain. At least, that’s what some of the murals suggest. It may be one of the factors why Sal Vindagnyr was prosperous. At any rate, the princess dreamed of a dragon filling the mountain with a cloud of scarlet poison. Coupled with this frightening dream, the Skyfrost Nail suddenly fell into the mountain, bringing with it blizzards of ice and snow.

A Ray of Hope

To find a solution to the problem, they asked an outlander, Imunlaukr, to find a way to stop the cold. He was close to the princess, who waited for his return and also gave him the Snow-Tombed Starsilver sword. She had dedicated a fresco to the hero to be completed upon his return, but her words never reached him through the storm.

While he was gone, the Skyfrost Nail split into three, landing on the Starglow Cavern, an underground chamber, and on the spot where their tree grew. Noticing the state of the tree, the princess took it upon herself to pick its most complete branch and tried to graft it onto a healthy one. It did not take, and the princess died in the snowstorm near her attempt.

Another also tried healing the Ley Lines connected to the tree, but they had all withered and any attempts were for naught. They brought the princess to be buried in the Starglow Cavern. With no princess, and no hope for surviving the sheer cold and endless blizzards, the people succumbed to its fate.

Imunlaukr returned unsuccessful in his hunt for answers and found the city abandoned and its inhabitants dead. Cursing the gods of Celestia, he left the city and the sword he was given to find a place where he could fight.

And so the once verdant mountain turned into one of ice and snow, its people have long gone. It lay untouched for years until the calamity happened. The dragon Durin, corrupted by Gold, attacked Mondstadt. With the Knights gone on an expedition, Barbatos was the only one who could defend Mond. He woke and summoned Dvalin, one of the Four Winds, to fight the corrupted dragon.

Dvalin was successful, though without sustaining injuries himself. He threw the losing dragon’s body onto the mountain. The princess’s vision did come true, only she and her people weren’t around to witness it. The shattered tree somehow revived itself with the dragon’s remains, but further growth wasn’t possible until the Traveler came to the mountain. The event also caused the people to rename the mountain as Dragonspine, as it is called that in the present time of the game.

This once-prosperous civilization now lay in ruins under all this ice and snow, with only a few murals to prove their existence. A few other relics may be found by the Traveler years later, all that’s left of the people.

As for Imunlaukr, it seemed he made his way back to Old Mondstadt, seeing as it was still the time Andrius and Decarabian were fighting for the seat of Archon. He somehow found a wife before dying, as his descendants were part of the Imunlaukr Clan of Mondstadt. He and his descendants entertained the gods with their battles. The clan faded into obscurity later, as currently, there are no known or confirmed characters to claim lineage.

That’s the tragic story of the people of Sal Vindagnyr and the mountain now known as Dragonspine.

The Skyfrost Nail bears some resemblance to the pillars seen in the log-in screen of the game. While it’s not confirmed, what we see on that screen may be a part of Celestia. This theory is also supported by the murals in the secret room in Dragonspine, depicting Celestia hovering over the mountain and the Nail in place.

Thus, it makes sense for Imunlaukr to curse the gods. If they hadn’t moved the nail wouldn’t have fallen into the mountain and killed off the people there. Then again, we don’t know the reason why they moved or if they meant for the nail to fall or not. Also, maybe it was for the best. After all, the ice and snow sealed in Durin’s corruptive influence, keeping it to the mountain. Otherwise, it could’ve spread to the rest of Mond. Hope you enjoyed learning about Dragonspine! Keep on having fun learning about the lore of Teyvat and the backstories of items and locations in Genshin. There’s always more to look forward to, whether in-game or here in the blog.