The 7-Series first appeared in North American BMW showrooms for the 1978 model year, and the big Bavarians established a solid sales foothold here during the E23‘s near-decade-long production run. Starting in 1986, the successor to that car, the E32, began coming off the Dingolfing assembly line, and it was bigger, sleeker, and generally badder than the E23. While officially a 1988 model-year car here, sales of the US-market E32 began fairly early in 1987, appearing in showrooms side-by-side with the outgoing E23s; this 735i in a Colorado yard is one of those cars. 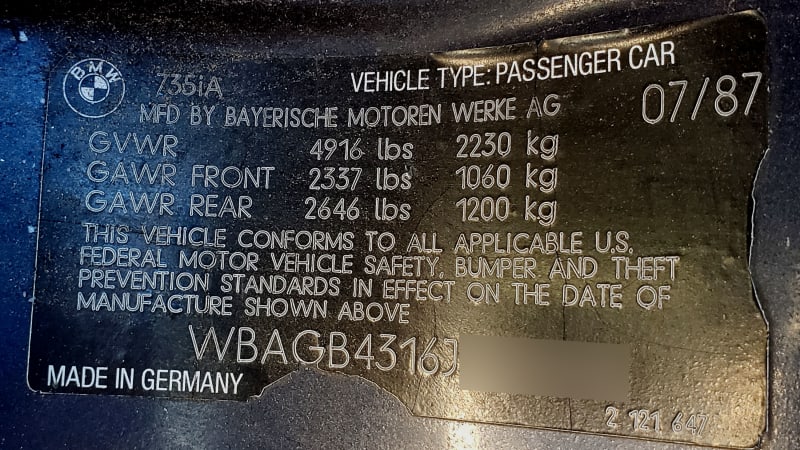 Built in July of 1987 but still a 1988 car, this machine showed owners of the increasingly long-of-tooth (but still intimidating) Mercedes-Benz W126 S-Class that perhaps they lacked the correct devil-may-care attitude required for, say, pitching junk bonds or finding creative ways to extract money from S&Ls. For those 1987 car shoppers familiar with white-powder-covered $100 bills and iffy business propositions, the new 735i offered a tempting sedan alternative to the life-on-the-edge Jaguar XJ, Sterling 827SI, and Maserati Biturbo. 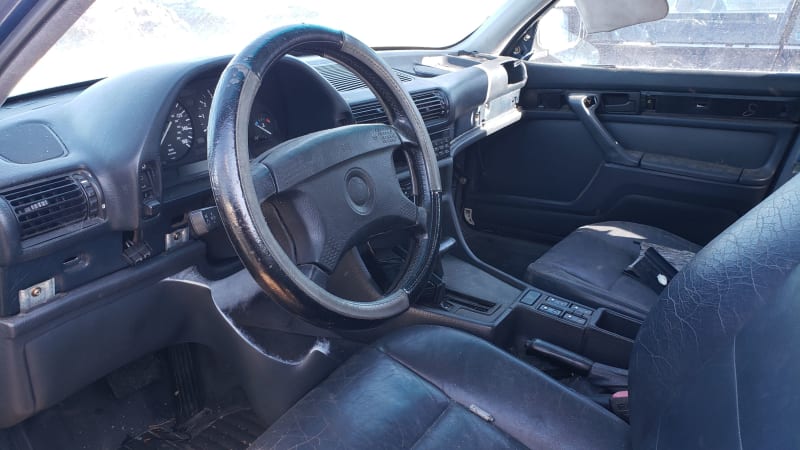 Inside, plenty of Teutonic steer flesh and every electronic gadget a mid-1980s high-roller could want. 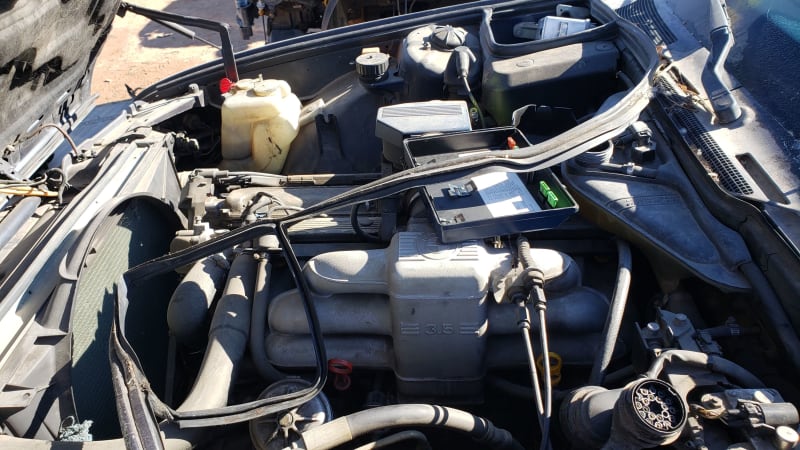 BMW shoppers in 1987 could get an ’88 750iL with a 296-horse V8 engine, but the 3.4-liter M30 straight-six in this car still made a sonorous 208 horsepower (yes, the lettering molded into the intake manifold claims 3.5 liters, but that was marketing hype used for the higher-compression 3.4). 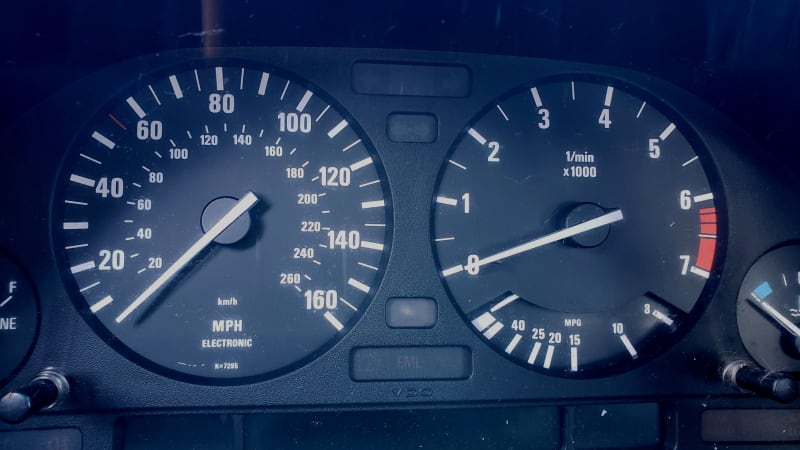 Would it do 160 miles per hour on level ground? Probably not, but at least the days of American-market 85-mph speedometers on fast cars were over by this point. 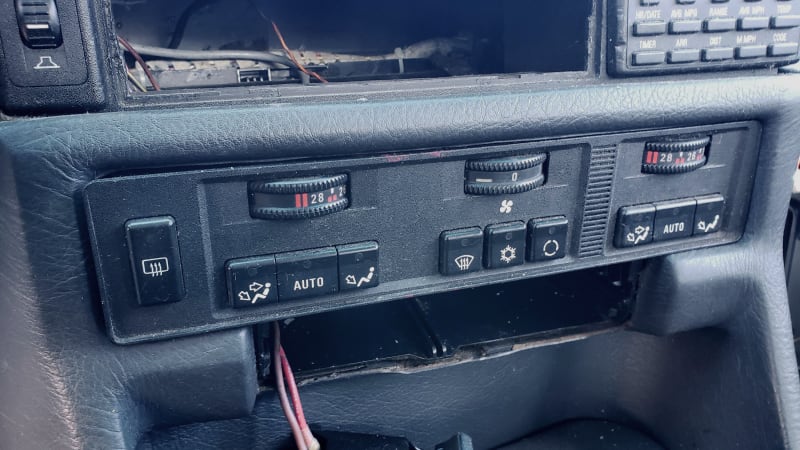 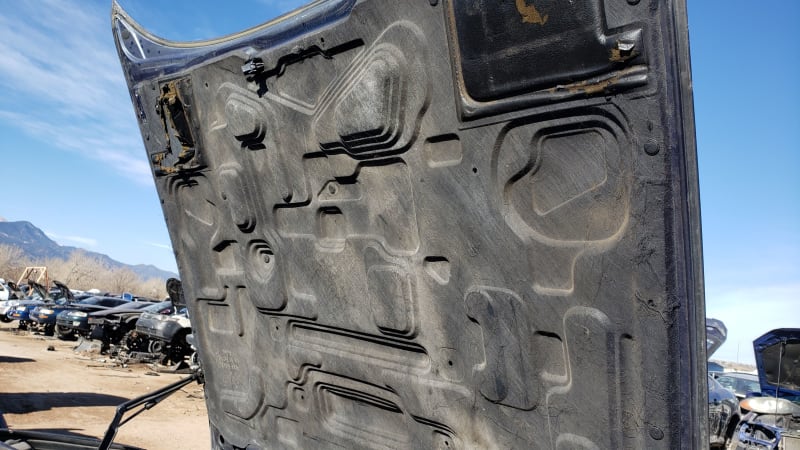 While buyers of the 636CSi (which had the same engine as this car) might have tolerated a certain raucous engine note at full throttle, 735i owners wanted nothing to drown out the sound of all that non-sequentially-numbered cash being counted by bent S&L managers in the back seat (or, you know, the latest hit songs on the FM). Therefore, the underhood insulation on this car is a masterpiece of audio-baffling engineering; we can assume that many Deutschmarks also went into designing the Helmholtz resonator system on this car’s intake tract. 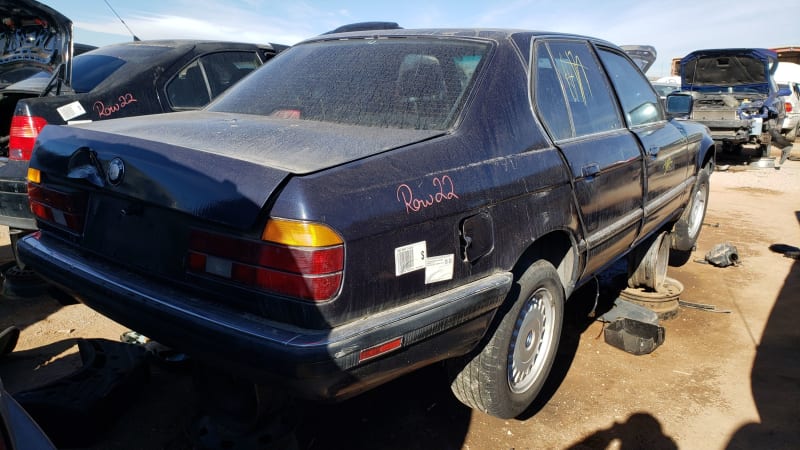 It’s a bit battered, but still pretty straight for a 32-year-old car in a place like this. Maintenance costs on an E32 must be steep, so we can assume that the failure of some costly component doomed this machine.

The most beautiful thing about it… is its spirit.